2033: You’ve been pursuing your scientific exploration on Mars, 11 Earth-months into the 12 you’ll be spending in Galileo Base, after which you will board your drop-shuttle and return to Earth. Much of the operation of the structures is automated, allowing you to spend most of your time on your own research. Today, a mining drone on a routine sampling program broke through into a cavern. Originally, everyone assumed it was natural, but it quickly became apparent this was the result of construction. Finding the first evidence of another intelligent species would be the scientific achievement for the ages. You’ve decided to explore it as a group and share in the glory that will soon be coming your way.

Check it out live

Or, well, once live - in the Actual Play by Welcome To The Party:

If you would like to have Project Galileo in print as well as pdf, you can purchase the print & pdf from Cold Hearth Collective, Indie Press Revolution, or Melsonian Arts Council

Project Galileo is an incursion for the game Trophy Dark by Jesse Ross. More information a can be found at https://trophyrpg.com/. If you do not have Trophy Dark, the basic rules required for play are included.

If the purchase price of Project Galileo is a hardship for you, please claim one of the free community copies below, no questions asked. Every purchase at regular price adds one additional copy to that pool.

In order to download this Trophy Dark Incursion you must purchase it at or above the minimum price of $8 USD. You will get access to the following files:

Support this Trophy Dark Incursion at or above a special price point to receive something exclusive.

Is the cost of Project Galileo a hardship for you? Please claim one of these community copies, for free, no questions asked.

I loved the reading and hope to play it soon. Great job!

Reply
Ember and Ash1 year ago

Thanks! When you get to play it, let us know how it goes 😄

Project Galileo is a 20 page one-shot, self-contained scenario that deals with space-archaeology horror in a way that might remind people of Alien, Martian Gothic, or Set Discrepancy.

It's written for Trophy, but the rules you need to play are included in the PDF, so it feels pretty fair to also call Galileo a standalone game. No prior knowledge of Trophy is required, and it makes a solid introduction to the engine.

To quickly summarize the engine, you can have uncomplicated successes, but you mostly succeed with a complication. You can't win fights against monsters if you try to kill them, but you can win fights to hold off monsters or accomplish some other objective in the meantime. There's a sanity mechanic called Ruin, which you can accumulate to boost your rolls, and which you can decrease by sabotaging your party's efforts.

It's cool and flavorful and focused on discovery horror---you're not likely to be destroyed unless you choose to be, or until you've gotten to the end of the adventure.

Story-wise, in Galileo you play as a group of scientists exploring a newly-discovered non-human site. The site begins to wake up as you explore it, ultimately leading to a confrontation at the center.

The focus here is very much on atmosphere. If you skip over it, you'll end up with a very flat, non-scary feeling game. If you lean into it, you'll get a ton of mileage out of talking about the silence and the way flashlight beams play over the surroundings.

The monster(s) itself didn't strike me as scary at all, but the set-up sells it.

Overall, I would recommend Galileo to anyone who likes slow-burn horror, with mechanical crunch present but not running the show. Also, if you're in the market for a spooky, atmospheric one-shot or convention game, this is a strong candidate for an impulse-purchase.

The tone on Project Galileo is just horrifying! I felt so isolated imagining myself as a mars explorer descending into the inky darkness below. The rings are creepy; not in a gore, cliché fashion, but eerie and ancient. Don't get me wrong, there is space for gore, if that's your thing, but it gets just as gory YOU wish. This just makes me feel sad, lonely and scared, and that's what i like to feel playing Trophy ! 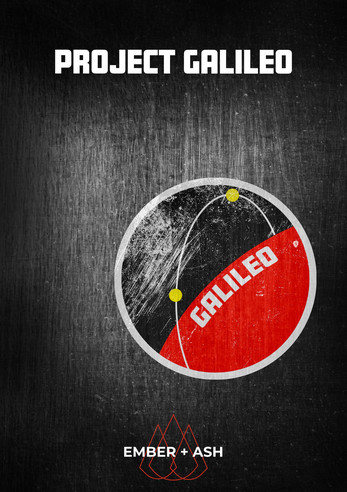 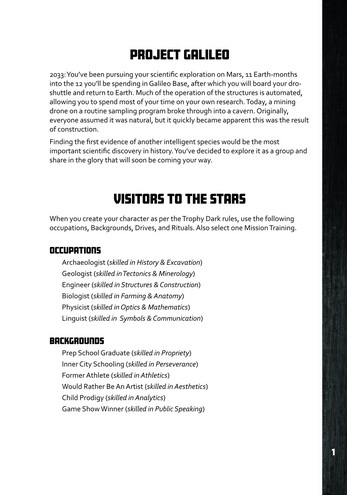 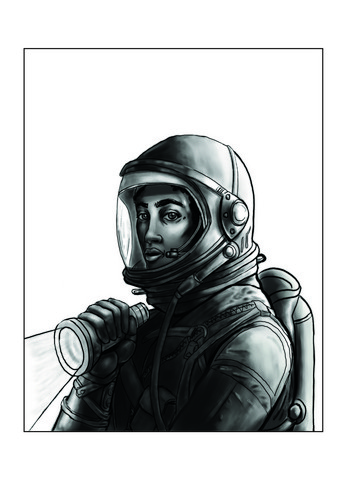 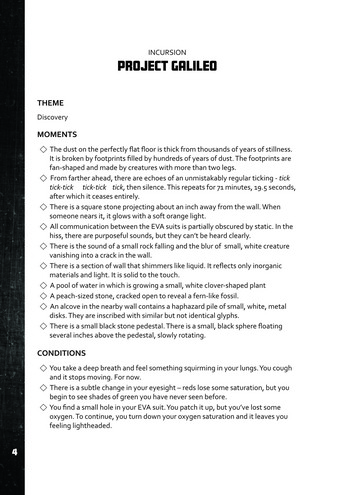 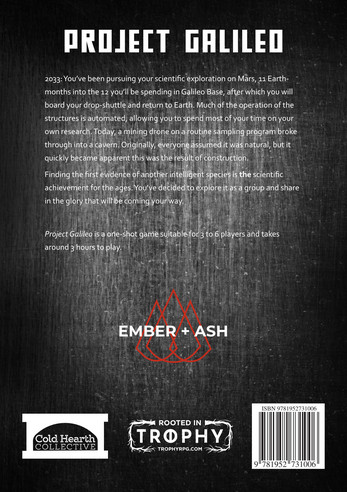